It’s not often a chapter of a book walks into Jeremy’s – albeit on the back of a customer. But when the best selling author Peter James, something of a Jeremys’ regular, arrived on the terrace for lunch, the lining of his jacket was solid print - and Peter’s companion, journalist Arnie Wilson, could hardly resist reading it instead of the menu!!

Says Peter, who has a home in Sussex, “In 2010 I donated a charity auction prize in which the winner could have a dead body found in their business premises in a future Roy Grace novel. A chicken farmer won, paying £3k. So I decided for my novel Not Dead Yet, in 2012, that human remains would be found in the slurry beneath his hen house during its annual clean-out, and there would be fragments of suit cloth. Grace takes the fragments to a Brighton tailor, Gresham Blake, who helps him to identify the provenance - Dormeuil. 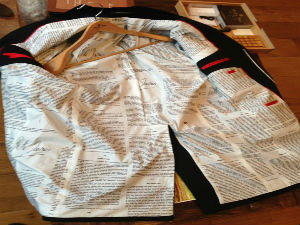 "Gresham was so thrilled that he had the lining of a coat and a jacket printed with the entire chapter, and my signature and gave them both to me as a thank-you present! He’s a wonderful tailor and I adore both items. I now also have a summer-weight jacket from him too!"