Cheese doesn’t always need to be as the last “port” of call after a wonderful restaurant meal. It can be the inspiration for a spectacular main course too, as may discovered at Jeremy’s Restaurant at the end of May.

The big cheese night at Jeremy’s was anything but small beer! 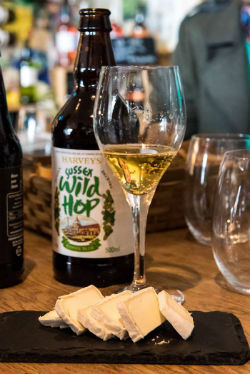 Chefs Jeremy Ashpool and Jimmy Gray were joined by David Deaves of La Cave à Fromage and Edmund Jenner of Harveys Brewery for a special one-off supper featuring dishes inspired by local beers and a selection of cheeses.

And ladies – if beer was not your normal tipple, they were encouraged to give it a try? But if you’d really rather not, Jeremy’s team were persuaded to offer a wine alternative

Of course there had to be a little research into the subtle Harveys flavours of such ales as Wild Hop, St Richard’s, Priory and Prince of Denmark, and who else could possibly undertake such a vital scientific task but our two chefs! So Jeremy and Jimmy dutifully subjected themselves to a tasting session earlier in the year at the La Cave à Fromage store in Hove, where they carefully matched some of Harveys’ many craft ales with a selection of artisan English cheeses to create a superb menu.

The mystery of the Lancashire Bomb was revealed in the Brighton Fish pie! When accompanied by St Richard’s Ale.

This event was in partnership with the Brighton & Hove Food and Drink Festival, it was tasty and heaps of fun.