When the famous name behind a Fleet Street column took a few days off, he duly returned refreshed to the office one Monday and said to his No.2: "Great column today! It was so good I thought I'd written it myself."

It's very similar in a really good restaurant like Jeremy's. If you didn't know that Jeremy was grabbing a few days of well-earned holiday, would you be able to tell from the food that he was absent? One of the great strengths of a great chef is the quality of his deputy. And while Jeremy and Vera (also grabbing some leave from her equally demanding post running Café Elvira) were relaxing for a few days on a gulet in the Aegean (although Vera did find the time to prepare our famous toffee pudding for Captain and crew), the young Turk was running Jeremy's kitchen on behalf of the old master 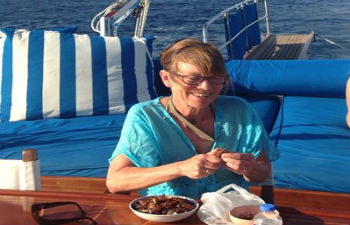 And the verdict? The quality of the food and the menus maintained Jeremy's usual high standards.  And yes, customers unaware of Jeremy's absence wouldn't have known the difference. Jeremy, of course, is irreplaceable, but Jimmy - who after all often takes the leading role even when Jeremy is on duty - kept the flag flying brilliantly.

Not only that - his menus were thoughtful, colourful, stylish and environmentally responsible. Jimmy doesn't just cook superbly. He studies what he cooks and, for example, rather than serve fish that's threatened with depleting stocks, chooses something that is not - currently organic farmed halibut from Scotland.

No wonder he was named Sussex's Young Chef of the Year 2013! Welcome back Jeremy and Vera. We missed you.  But perhaps not quite as much as you might think!

There's still availability for our Feast of West Sussex Dinner on Thursday 2nd October and for our South African Wine Dinner on Thursday 23rd October when we warmly welcome vineyard owner Martin Meinert to introduce wines from his family's Devon Crest Vineyard in the Stellenbosch region.