Of all the celebrities who have visited Jeremy’s over the years (there have been many, including Greta Scacchi and John Hurt; and only the other week Sir Cliff Richard popped in for lunch) Andrew Samson probably got Jeremy more animated than most - because of their common love of cricket. 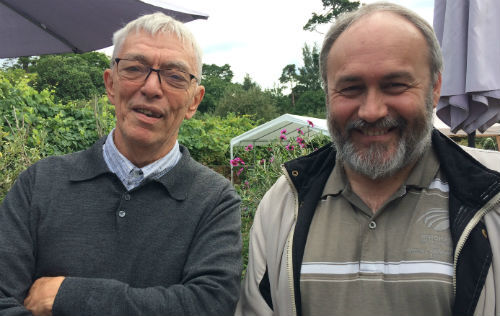 As any cricket fan will know, since 2009 Andrew has worked for BBC Test Match Special as their quick-witted and immensely knowledgeable scoreboard statistician. According to a recent interview in Cricket Magazine, the South African earned praise for his “softly-spoken and humorous interjections, razor-sharp judgment of what constitutes a meaningful stat, and ability to remain polite while still concentrating on his scoresheets”.

Back in 1994 he was appointed statistician for Cricket South Africa, having worked for various radio stations providing cricket statistics since 1988.

Jeremy, no mean bowler himself, though perhaps more village cricketer than test match performer, found time – how could he not with such a rare opportunity? -  between lunchtime duties to chat (almost equally knowledgably) with Andrew about all kinds of aspects of cricket, particularly the test series with India.

“It really was a great opportunity to indulge my passion for cricket with a real expert” said Jeremy. “Next time I hear Andrew on Test Match Special I’ll be able to have a little smile to myself."

Apart from writing The Moon Is Toast (2016) - a rare insight into a year in the life of a cricket statistician, he is co-author of 1107 All Out – The Cricketer’s Quiz Book, The Blue Book, South African and International Sports Fact Finder, and SuperSport Fact Finder produced annually between 1992 and 1997. Between 2009 and 2011, he presented Go Figure on Radio 702 in South Africa.

PS:  Andrew was bowled over by Jeremy’s signature dessert, sticky toffee pudding, as indeed was Phil Tufnell, the former English Test cricketer turned television personality. So much so that when Jeremy’s hosted a dinner for the late and much-lamented Christopher Martin-Jenkins, the celebrated cricket commentator, it was christened Tuffer’s Toffee Pudding!

The Moon is Toast is available from TSL Publications, click here.