When regular customer Arnie Wilson heard that his crime-writer friend Peter James (left) was eating here at Jeremy’s one night recently, he left a card for the author of the Roy Grace thriller series to be delivered to his table. A message on the envelope said: “Roy Grace is watching you!” and inside was a message to Peter’s wife Lara which said: “Don’t let him drink too much!” 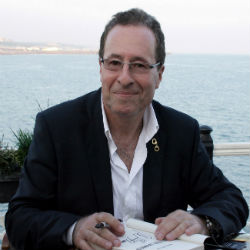 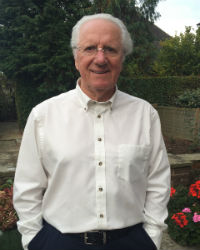 There was only one problem. It was the “wrong” Peter James (right)

As it turns out, the Peter James eating at Jeremy’s that night was in fact an old friend of – shall we say - the “right” Peter James. They’d met 25 years ago through a mutual friend and had stayed friends ever since. After the writer married his bride Lara here at Jeremy’s, the ‘wrong’ one even came to the reception at the ’right’ one’s home.

The “wrong” one has often joked that he could persuade restaurants to give him a VIP table simply by giving them his name, but oddly enough in the early days of their friendship, the boot had been on the other foot. Back then, before Peter the writer had become famous, one Michelin-starred restaurant where they‘d agreed to meet had been more impressed with the “wrong” Peter James’ pedigree than the one who eventually became famous.

“You’d better leave a decent tip, Peter” the “wrong” one had said at the time.

And years later there was another comical situation when both men inadvertently booked a table at another restaurant on the same day. “When they saw two bookings from Peter James, they cancelled one of them” says the “wrong” one, who got there first. “So when the ‘real’ Peter turned up he didn’t have a table!” 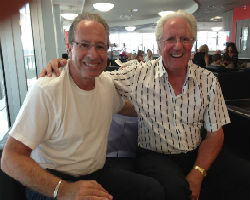 The two Peters have never eaten at Jeremy’s together and they aim to out that right next year, no doubt deliberately confusing our staff here by both booking a table independently. (Left, here they are together!)

Meanwhile Arnie Wilson says: “I’m glad it was only a card I left for Peter and Lara when I heard ‘they’ were eating at Jeremy’s. I’d have been pretty miffed if I’d left instructions for them to enjoy a bottle of champagne – and this other chap had guzzled it!”

When the “real” Peter heard Wilson was getting in touch with the “wrong” one he said: “Give myself my best regards! Hope to see me soon.”

But the wrong Peter had the last laugh. “I’m the right one really” he said. “I was born a few years before this other chap, so I’ve existed quite a bit longer than he has!”